The Cairn in the Lay-by on the North Lane of the A94, South of Stonehaven overlooks the farm of Clochnahill where in 1721 Robert Burns father, William Burness, was born. Robert’s grandfather had been employed by the Earls Marischal in the gardens of Dunnotter.

With the failure of the 1715 Jacobite uprising leading to the downfall of his Jacobite supporting employer, the dismantling of Dunnotter Castle and demise of the estate, Robert Burness took a lease on the farm of Clochnahill.

The aftermath of the failed second Jacobite uprising in 1745 created great havoc across the land. Whether it was this which caused failure at Clochnahill or bad luck in their tenancy agreements, we cannot be sure, but by 1748 Robert Burness could no longer support his family.

To obtain work they scattered in all directions with William Burness (Robert Burns’ father) working initially as a gardener in Edinburgh, thence migrating to Ayrshire where he obtained the lease on a holding of seven and a half acres at Alloway. 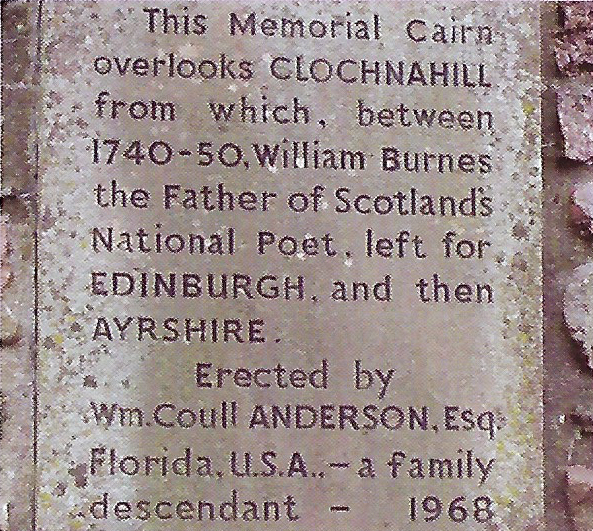